By all accounts, Morad was a regular 17-year-old boy from a loving home in a small northern Israeli village. He excelled in school and enjoyed spending time with his friends.

That was before an innocent text message sent to a female classmate got intercepted by the girl’s older brother, who misinterpreted the text as flirtation.

That night, the brother kidnapped Morad, and along with several cohorts, beat him within an inch of his life. Morad’s injuries were so severe he required 11 days of hospitalization. When he regained consciousness, he was so traumatized he had effectively dissociated from reality.

“I haven’t seen that degree of severity even in older people,” said Dr. Ilan Kutz, former director of Psychiatric Services at the Meir General Hospital, where he treated Morad. “It usually lasts a few hours at most; never anything this long.”

Repeated attempts to reach Morad failed, and after two months of non-responsiveness and a deteriorating psychological condition, Kutz decided to try an experimental method: dolphin therapy.

“There are people who work with dogs, with horses, and I’d had one lucky experience with the dolphins before,” he said. “The idea was to teach him to communicate because he wasn’t communicating with anyone, so I wanted to try something that was nonverbal.”

Since the 1970s, dolphin therapy has been used to treat children with cerebral palsy, autism and cancer, as well as trauma victims, like Morad. It took off when an educational anthropologist named Betsy Smith noticed the therapeutic effect dolphins had on her disabled brother.

“Studies show that dolphins have a preference for personal communication with humans. They like it,” says Kutz. “They have a smiling mask, they talk, they like to be cuddled, plus they show a preference when they like someone, so I think all of this is very healing.”

The therapy’s aim, according to the Henry Spink Foundation, a leading research information centre, is to “increase sensory activities.” Children are encouraged to swim, touch, feed or pat the dolphins, while therapists work on specific areas such as speech and motor skills.

While this method does not claim to be a cure-all, research has found that sustained contact with the animals has alleviated many symptoms of illness.

Blood samples analyzed before and after the therapy show a changes in hormones, endorphins, enzymes and T-cell counts. Although researchers have yet to determine how this happens, ongoing studies are encouraging.

This possibility of rehabilitation was enough for Morad’s father to quit his job, sell his properties, and move 500 km away so that his son could attend the dolphin therapy program in Eilat, a coastal town on Israel’s southern tip.

Eilat’s reef is unique in that it provides a natural, open aquatic space for the dolphins. They are free to come and go as they please and are never forced to interact with humans.

What happened next shocked everyone, and has become the subject of a fascinating documentary, Dolphin Boy. which premiered last week at the Hot Docs festival in Toronto. You can see the trailer for the film below. 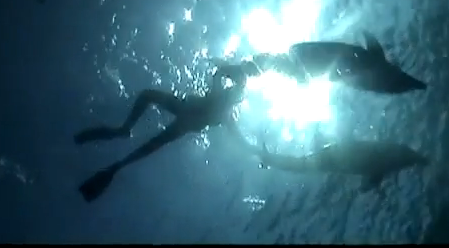 “The most amazing thing was the way the dolphins reacted to him. It almost feels like they wanted to help him,” says Yonatan Nir, who, along with co-producers Dani Menkin and Judith Manassan Ramon, spent several years documenting Morad’s journey.

“I would say almost from the very first day, even when Morad was not speaking to people, he was amazed, attracted to these animals and wanted contact with them.”

The film tracks Morad’s unusual connection with the animals, who gradually teach him to trust, love and communicate again.

His affinity with the creatures becomes so strong that he begins adopting their characteristics. He swims like a dolphin, dives  to 20 metres with ease, stays underwater for minutes at a time and — most incredibly — releases air bubbles through his eye in the style of a bottlenose dolphin.

But despite his progress, a new issue arises: Morad effectively erased his past, reinventing himself as “dolphin boy.”

“I came down to Eilat because I didn’t believe my ears when they told me,” said Kutz. “He didn’t know who I was. So the next step was how to combine this new personality with his old and make him one. And we took our time. We all waited until he was ready.”

Though his reintroduction to regular society remains an ongoing process, Morad has made incredible strides and last year moved back to his village.

Nir says the film’s message is the redemptive power of love — both human and animal — and its ability to transform.

“There are hundreds of millions of people suffering from trauma in this world. We wanted to show you could take a person with the most terrible trauma and [if] you give them love from people and nature, you can cure them.”

2 thoughts on “Morad, the boy healed by dolphins”