I love dolphins. When I was a child, I loved to visit Sea World – particularly the dolphin petting pool where I could touch the beautiful creatures, if only for a moment. I imagined becoming a marine biologist (not for my love of science, but as a way to spend my life with dolphins), and more importantly, so I could swim with dolphins. When I was in middle school, I found out that tuna fishing killed dolphins, and I stopped eating tuna until the introduction of dolphin-safe tuna. So, when I had the chance to go swimming with dolphins for the first time a few years ago, I was ecstatic. It turned out that my childhood dream of a dolphin encounter was still alive and strong. 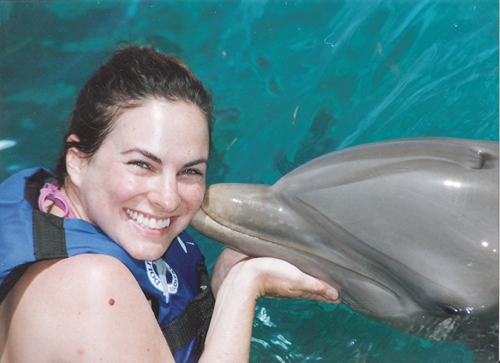 I took a trip to Cancun, and a visit to Dolphin Discovery for a dolphin swim was on the top of my list. I chose the “royal swim” dolphin experience, which included two dolphins and the “foot push” so I could surf two dolphin noses across the water. I’m not going to lie, it was super fun. I did wonder about the conditions for the dolphins, but it seemed pretty good to me at the time because they were not confined in swimming pools, but rather swimming in a contained section of the Caribbean right off the coast of Isla Mujeres. Then I watched The Cove documentary and my perspective on my dolphin experience changed.

I thought The Cove movie was about the unnecessary killing of dolphins in Japan and a group trying to save Japan dolphins, but it was also about the conditions of dolphins all around the world, including the cruelty of dolphin parks. I was shocked and saddened by what I learned, and filled with regret for having gone on my dolphin swim. As much fun as I had during my dolphin experience in Cancun, I vowed to never visit dolphin parks again in the future.